PICTORIAL HISTORY OF THE RAGDOLL

Ann Bakers cattery where it all began in 1963. This is the birthplace where the Ragdoll breed began. The home of Daddy Warbucks, Fugianna and Buckwheat.

Ragdoll Creator Ann Baker holding Fugianna a seal bicolor. She was the foundational Ragdoll for the light side.

Ann Baker holding one of her very early litters. Kookie, Toy Sue, & Kookie Tu. They were born in 1966.

Ann Baker holding one of her early Ragdolls. Notice how dark the points are. 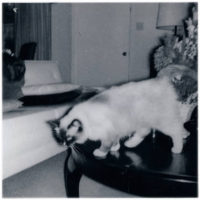 Daddy Warbucks the foundational male for the Ragdoll Breed. He had a white blaze and a white tail tip, still seen in many of our Ragdolls today. 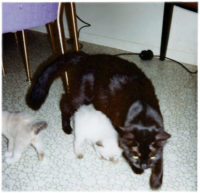 Buckwheat was the foundational female for the dark side of the Ragdoll Breed. With her are Tiki & Kyoto

This may or may not be Josephine. Ann has written on the back of this picture Josephine, most people believe that it is a stand in.

Laura & Denny Dayton. They bought the first Ragdoll Breeders Rosie & Buddy from Ann Baker in 1969. Denny created the Ragdoll Genetic Chart and together they started the Ragdoll Society in 1975, it later became the RFC/RFCI. 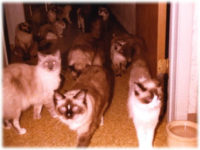 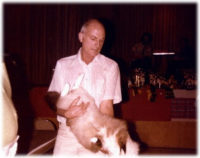 SHOWTIME: Denny showing one of his early Ragdolls. Notice the size of this large male. 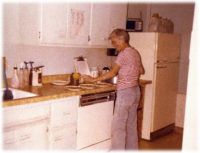 Ragdoll Dinner time at the Daytons 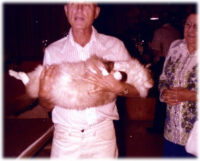 Some people say that 20 lb Ragdolls are a myth, well check out the size of this big boy. 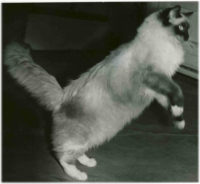 This is Rosie. Rosie and Buddy were the first breeding pair ever sold by Ann Baker in 1969. I like her size and length of body. 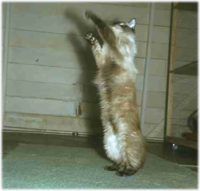 Denny Dayton getting ready to show one of his early Ragdolls, about 1971. 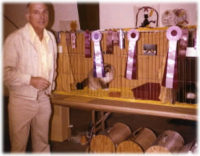 Denny with some of his Ragdolls at a show where the Ragdolls seem to have won a number of Rosettes.

Denny & Laura in England in 1983 visiting Lulu Rowley and the many Ragdolls they had sold her. 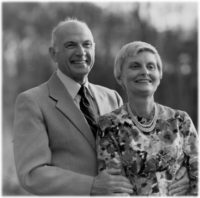 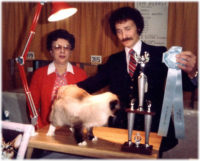 Blanche Herman with her famous Ragdoll Perrywinkle being judged by ACFA judge Tom Herbst who awarded Perry with Best Alter in Show. Notice the nice trophy he won. 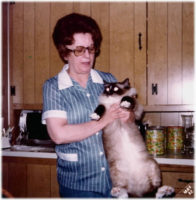 Blanche Herman with her famous Ragdoll Bartholomew, only Ragdoll to ever be entered into the Guiness Book of World Records. Entered in 1986 as the world’s largest domestic cat.

Elaine Fagerstrom who served 4 years as President of the RFCI. Her cattery was Sheyenne. Some of you may have heard of her Sheyenne Scout, a beautiful bicolor who is in many of your pedigrees.

Rita Sievern, Blanche Herman, Pat Rados & Lulu Rowley March 1985. They were some of the early Ragdoll Breeders. As you can tell they knew how to have a good time. I wonder what the conversation was about? 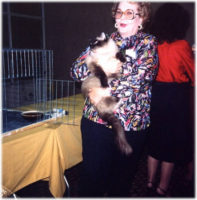 1981 Dorothy Metcalf & Dusty Miller with the red blouse, early Ragdoll breeders. Dorothy served many years on the RFCI Board and was voted in as a Lifetime member of RFCI. 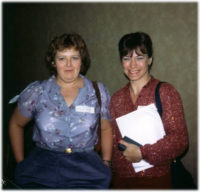 Glena Spauding & Pat Heath 1981. Glenda served as President of RFCI and was voted in as a Lifetime member of RFCI.

Susan Bugdin, Glena Spauding & Blance Herman at a show in Nashville TN. These 3 ladies and Dorothy Metcalf worked very hard with Denny during the early 80’s to get our Ragdolls accepted in the various cat associations. It was not an easy task.

Denny Dayton & Doris Michaux who served as one of the first editors of the Ragdoll News Letter now called Ragdoll World. It is the longest running Ragdoll news letter in the world. It is now in it’s 31st year. 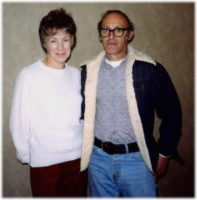 Linda Willaims & her husband 1981. Linda was another of the hard working members of the Ragdoll Society who worked hard to get our Ragdolls accepted in all cat assoc. including CFA. 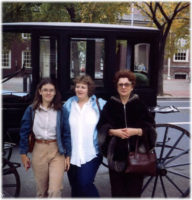 Meg Miller, Glenda Spauding, & Blanche Herman in Philly in 1981 for a Ragdoll Presentation. Early Ragdoll Breeders working together to advance the Ragdoll.

Ragtime Bartholomew the only Ragdoll to make his way into the Guiness Book of World Records, 1986. Born 5/18/80. His dad was Blossom-time Tony, his mom was Ragtime Mocha. Died 10/18/91 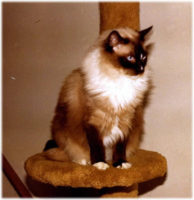 Ragtime Bartholomew Bart loved to sleep with Blanche, and was a close companion to Dixie. After Barts death Dixie spent many days looking around the house for him. 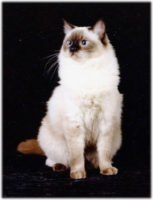 Dixie was a wonderful representative of the Ragdoll breed. She was born in Aug 1981 and was a constant companion of Bart. She loved to be shown, and did very well in the show ring. 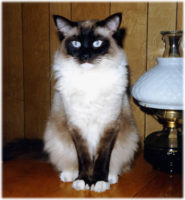 Ragtime Perrywinkle ACFA Judge Tom Herbst loved Perry and gave him Best Alter in show several times. Tom once told Blanche that the Ragdoll Standard must have be written using Perry as the guideline. He was a perfectly marked Mitted Ragdoll. He had beautiful dark point color. 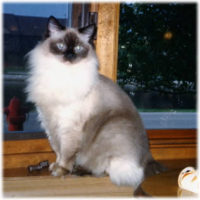 Ragtime Dixie 3rd Best Championship Ragdoll in RFCI 1982-83. She was a big girl and loved to show. 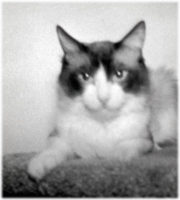 Blossom-time Tony Born 2/27/79. He was the father of Ragtime Bartholomew. Tony weighed 17 lbs and lived 14 years. 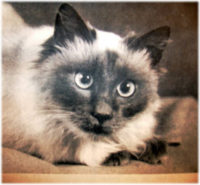 How did he get on this?? He’s no Ragdoll! What he is, is a blue applehead Balinese male, who may have been one of Ann’s Balinese used to bring in the lilac/blue to the Ragdoll.

This is Ragtime Von Brandenburg. I love the head type on this Ragdoll as well as the dark point color. He has a very nice modified wedge. 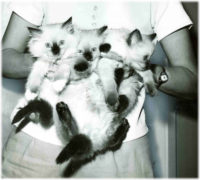 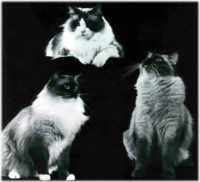 This is Floppy who was never bred but was used by the Daytons as a salescat. He would come up to potential buyers and flop over on his back wanting his tummy rubbed. He sold many a Ragdoll. 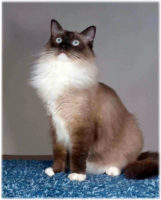 Blossom-Time Pip Born 12/19/71 Pip was born for the show hall, he loved to be shown, and had a long carreer being in 79 shows in 8 years. He was a show off and delighted judges and spectators. He was written about many times and was on the cover of Cat Fancy Magazine. He was responsible for selling many a RD for the Daytons. 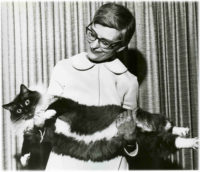 Laura holding Loveable. He was a BIG boy, notice the perfect belly stripe. He was another of the great salesmen for Blossom-Time. He loved people and would go right up to customers, and rub against them and purr them a song. 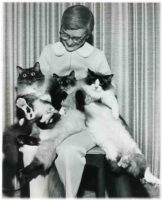 Laura holding Loveable, Phil & Floppy. One of each of the 3 patterns in Ragdolls. Say cheese! 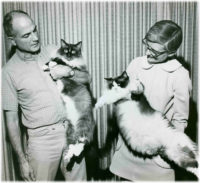 This is Raggedy Ann Kyoto in all his glory. He would replace Daddy Warbucks as Ann’s top stud. He would have a very short life span as Ann claimed that he was poisoned in about 1972.

Pictures and text copyright © 2006 RFCI.
May not be reprinted/published without authors express written permission.
All rights reserved.